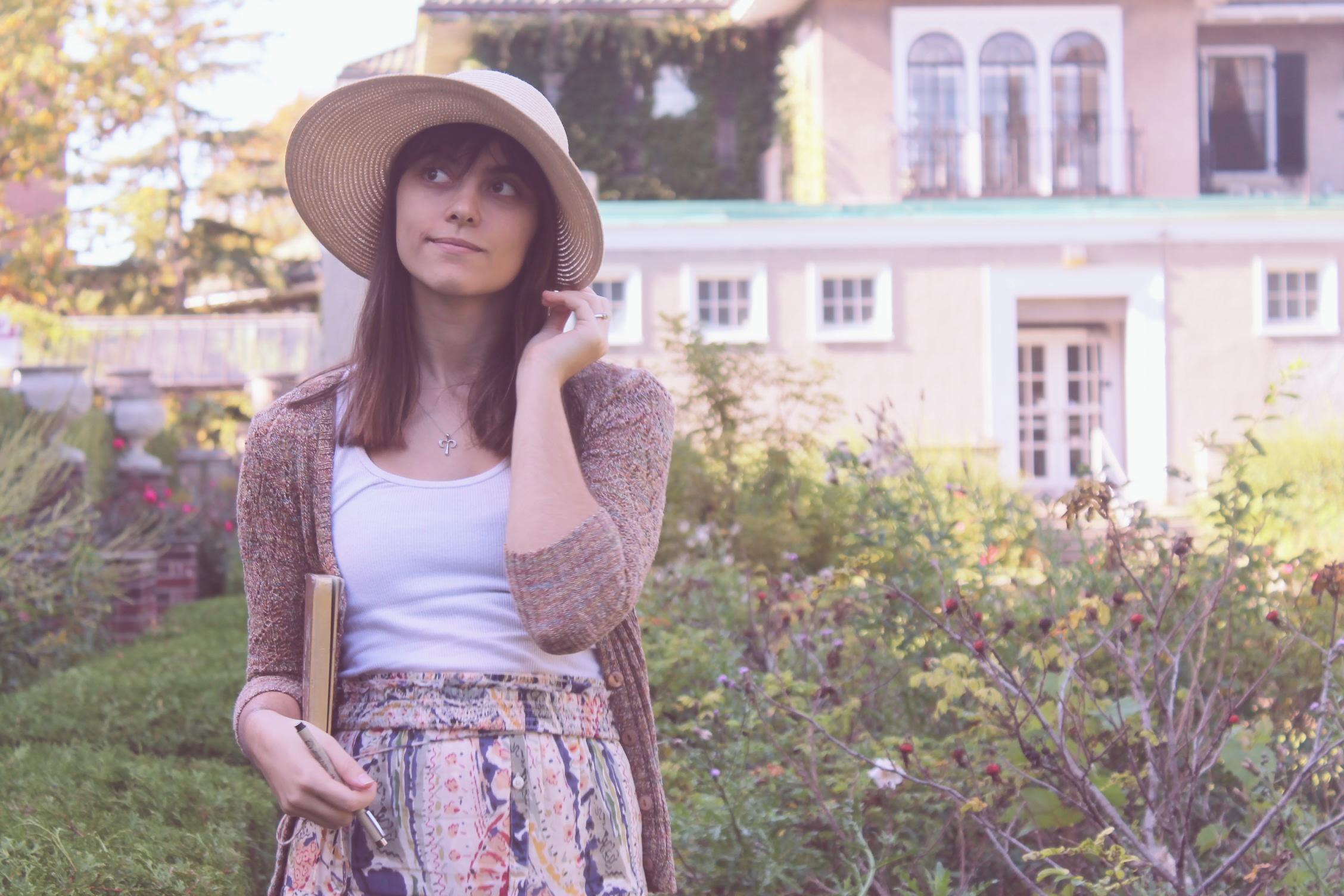 In the course of publishing Heretic’s Guide, we’ve fielded all sorts of thoughtful questions regarding the book and the writing process. Below you can find Sienna’s answers to the most popular questions we receive. Whether you’re curious about the many fantasy languages present in the novel, or about Sienna’s literary influences, or about exactly how anxious an anxious protagonist is allowed to be, read on!

Q: What inspired you to write The Heretic’s Guide to Homecoming?

A: It came out of two things. Firstly, I had just finished Paulo Coelho’s The Alchemist, a book which I can safely say changed my perspective on life. Once I put it down, the only thing I could think was “I want to write a book like that”. Secondly, the very same day, I had a conversation with a kindred spirit. It was a great big conversation about space, time, the expression of personal creativity, and the feeling of belonging–how to cultivate it in ourselves and how to inspire it in others.

I had just entered university and I was bristling with big, existential questions that were not easily answerable: Why is it so important to keep growing? What does it mean to be authentic? Is there value in pain? Art was always how I had grappled with complex issues before, and so somewhere in the hours between these two occurrences, the seeds were planted to write my explorations of those questions into a narrative. I guess I could have just written some essays instead, but they would have been a lot less fun to reread later on.

Q: Ronoah is a character with a lot of anxiety–is that something that you experience personally?

A: Oh, at the beginning, for sure. I had panic attacks a couple times a month from ages 13-19 or so. I still get them once in a blue moon, either because I’ve watched something slightly spooky and my overactive imagination is kicking in, or else for no reason whatsoever. The descriptions of Ronoah’s anxiety attacks are directly taken from my own sensory experiences–which is kind of cool. Like, sure, I had to deal with that nasty feeling, but I got some good writing out of it. Nowadays I approach most things in life with the “how can I write about it later?” mindset, which heightens the good days and makes the bad ones far more tolerable.

I struggled a lot in early drafts with exactly how much of Ronoah’s anxiety to show. In the first pass it was kind of shallow and flat, because I worried people would scoff at him–and by association, at me and all the other anxious folks out there. Then in the second pass I swung the other way and wrote it in too realistically, to the point where it was too exhausting to read. I think in the end I found a happy balance: uncomfortable to witness, but with enough absurd or self-deprecating humour thrown in to lighten the load.

Q: The genre of this book is very interesting. On the one hand, you have a massive amount of worldbuilding that is typical to fantasy, but on the other, so much of the story goes on within Ronoah’s head. How would you define the genre?

A: My betareaders and I have agonized over the lack of a readily available category for years now. We eventually just made up a new genre: ‘introspective fantasy’, which is like one part literary fantasy, one part psychological fiction. There’s this planet with two moons and singing stone arches and an ancient superhuman species, but there’s also this boy who is scrutinizing his every impulse and motivation in search of greater meaning. I’m fascinated by people’s internal processes, and I find very few stories that explore characterization to my satisfaction. I’m also tired of fantasy worlds pulling so hard from European culture and history. So I built something that met both of those desires.

Q: On the topic of worldbuilding, what inspired you to create the places that Ronoah travels to?

A: The geography is pretty straightforward, actually. I knew what kind of climate Ronoah came from, and then I just researched the kind of climates that exist nearby, and that was my decision made for me. In terms of culture, I’ve found interesting elements from just about everywhere. The Pilanovani governmental system has references to traditional Ojibwe governance and the widely-cited forgiveness practice of the Bemba tribe in Zambia, for example. I’ve spent as much time researching as I have writing, and I’ve found everything from a blue volcano in Indonesia to an underwater river in Mexico (you read that right) to claims that Ancient Egyptians used sound healing in their temples. And of course, you hear echoes of the Angkor area of Cambodia in the Pilgrim State.

Q: There are many languages as well. Can you tell me a little about how you got into building those?

A: This is kind of a secret, but here goes: I got my degree in linguistics, but originally I wanted to be an animator. I was going to submit my portfolio to Sheridan and everything. But in high school I got really into creating fictional languages (or conlanging), and when I found out that linguistics was a thing you could study, I decided to switch tracks to that instead. The logic was that I could use what I learned in class to improve the languages I was building. Does that mean I spent $30,000 on an extended art project? You tell me.

Q: What challenges did you face when writing this book?

A: To a certain extent, I think all artists face the same challenges. We worry about quality and value: Will my story be any good, will people like it, is it worth the hours and hours I’m pouring into it? Or we get frustrated with the work itself: This character is flat, this plot is full of holes, this conversation is getting out of hand, I don’t know if my voice is coming through clearly enough. Having said that, I think a challenge that was unique to this book was writing a character who ‘has all of the answers’ without making them annoying as shit. That particular archetype is hard to pull off without sounding either hokey or pretentious–I had to do a lot of internal work until I found answers I believed in.

Q: Who would you cite as some of your key artistic influences?

A: Again, Paulo Coelho’s The Alchemist was a huge catalyst for this particular work. (My only wish is that I could read it in the original Portuguese, as I’m sure it’s even more poetic and beautiful.) I’m a big fan of everything Neil Gaiman writes–he has this self-effacing humour paired with this dark sort of whimsy that I wish I could achieve. Keith Miller and Sofia Samatar are the writers who remind me that beautiful, sumptuous writing is still allowed in a world of killing your darlings; A Stranger in Olondria was an absolute masterpiece of worldbuilding, and all of Keith’s books stick to me for days after I’ve finished them. I’ve got a bit of synaesthesia, and all of these authors have writing that strikes me as either deep, rich blues or these amber, ochre tones. Put them together and you have the colour palette of Heretic’s Guide.

Q: What comes next for Ronoah? How many more books are going to be a part of The Heretic’s Guide?

A: Heretic’s Guide is a duology, so we’re halfway through our time with Ronoah and his companion. As for what comes next, the hint is in the name. The first book, Theory, was all about Ronoah learning to be comfortable with himself, to accept himself as he is–the second book, Practice, will explore what happens when that newly-found confidence is applied to the external world. I can’t tell you much, but I can tell you that there will be mangoes. And tightrope walkers. And gods–plenty of gods.

Q: This book is a part of The Shale Project. What does Shale mean to you?

A: Shale is my excuse to research everything from gift economies to exoplanets to wilderness survival skills. It’s the fictional world that houses not just Heretic’s Guide but a whole suite of other forthcoming stories, in all places and times across the planet. When you’re building a whole world, you want to use it more than once, or you’re going to be wasting a lot of valuable time and creativity every time you tell a new story. For me, Shale is a way of conserving and cycling that creativity forward.

Q: What are you hoping people will take away from The Heretic’s Guide?

A: I hope they use it as an actual guide. The name is a joke, but also it’s serious: I’ve described Heretic’s Guide before as ‘a compendium of all the lessons I have the most trouble retaining about life and success and society and finding purpose in what you do’. I’m writing it to remind myself of all the most important parts of living, but to do it in a way that’s entertaining, and poetic. More than anything, I hope folks will find a comfort or an encouragement or a eureka moment in this story that empowers them to embrace the glorious unknown in their own lives.